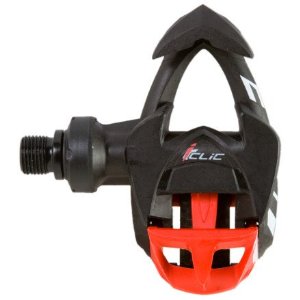 With the release of the iClic pedal, Time almost regained their former glory (but almost only counts in horse shoes).

I’ve been waiting since 1991 for Time to release a pedal that matched the incredibly smooth float functionality of their original road pedal. Luckily, I wasn’t holding my breath, or I would have perished from asphyfixiation long ago. The original Time pedal was made of aluminum that failed over time, and those failures were of a catastrophic nature. I’d be out on a ride when a huge chunk of the pedal body would just break off, leaving me pedaling unevenly home. I owned several pairs, and they all failed in the same way (never in the same place). But Time’s float outdid every other pedal on the market, hands down, and when you have knee problems, free pedal float is a valuable feature.

Before Time, I used to ride Look pedals, then Shimano, but the float was always clunky. You could move your foot in the pedal if you tried, but it wasn’t anything like smooth or natural movement, and I always had knee pain after and often during rides. After I switched to Time, my chronic knee pain was gone within one week.

Between the original Time pedal and 2010’s iClic model, Time made some pedals that seemed to have nothing in common with the original. I tried them, but they all lacked the famous smooth Time float. With the iClic, however, Time appeared to get it right. The float is so smooth you never even notice it.

If you’ve never ridden Time pedals, or you don’t need float, it’s hard to understand just how different Time’s mechanism is. My heel moves so much during each pedal stroke that a smooth float action is essential. Bottom line is that with Time pedals my knees don’t hurt, and with every other pedal I’ve ridden, they do.

Unfortunately, Time didn’t quite get it right with the iClic either. I have to call this a near-miss because the iClic is pretty darn good, but they seemed to have missed something with the cleat engagement. On the very first ride, roughly 50% of all pedal engagements resulted in being half-engaged. As the cleats wore down, the percentage got progressively worse. What’s weird is that it’s only the first engagement that doesn’t work. The second engagement is solid.

It’s almost as if the first clip-in cocks the mechanism (a small carbon spring), with my cleat clipped in, but with a distinguishable wobble effect, where it’s obvious that my foot is not level on the pedal platform. I then clip out and back in again in one motion, and the pedal engages correctly on the second engagement. This effect happens with both left and right pedals.

I tried asking Time USA about this, but they seemed to think it was due to cleat wear. It seemed completely lost on them that brand new cleats and pedals had the problem. Time’s response was simply that I should purchase new cleats, which makes no sense at all. Why would I invest another $40 into cleats for a defective $250 pedal? (Note: Time has now agreed to take a look at the pedals and cleats. I’ll post an update when I have their response.)

I rode the iClic pedals for over a year before finally giving up. They just do not work correctly. Additionally, the pedal body appears to be made of plastic or carbon, which means the platform wears down over time, making an already unsteady engagement just plain sloppy.

So I am back on Shimano pedals now, for the first time in 20 years, and you know what? They are smoother than they used to be, but my knees hurt after every ride. Still, at least I can clip in securely on the first try.

Conclusion: If Time could fix the critical issue of cleat engagement, the Time iClic pedal would be my first choice. If I were to rely on the current model in races, I would be shelled out the back right off the start line while trying desperately to get the pedal to engage correctly. So I’m back to waiting for Time.

Update: Time USA examined the pedals, but concluded that their original iClic cleat was flawed, and sent back the pedals with a new pair of cleats.